Thank you to everyone that helps us raise money for wells in Haiti over the weekend of September 23-25, 2016 with the River of Life. Water is critical to life and being able to provide community wells to remote villages in northern Haiti gives not only life but hope. 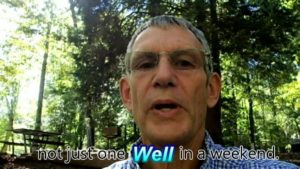 Last weekend, I experienced a miracle. It was a God Siting like we celebrate during our weekly River of Life services. The funny thing is, at the time, I didn’t recognize it as God working great wonders though ordinary people with a passion for sharing God’s love, a little gear and offerings from the heart.

As you probably know, last weekend was what we call our Well in a Weekend fundraiser where we literally try to raise enough money for wells in Haiti over the course of a weekend (I know, clever name, right?). The cost of each well is $2,500. Our first year, we set a goal of only one well. This year our goal was three wells. We had some energetic helpers from First UMC in Franklin, NC that offered five-star hospitality to outdoor enthusiasts and shoppers, along with donated pfds, jackets, camping gear, etc.

In the past we have met our goals through high-dollar donations of kayaks, canoes and rafts. This year, going into the weekend, we had no new boat donations. At the last minute a canoe and an inflatable sit-on-top were donated. A C1 left over from last year was brought by. Together the boats brought in less than $500 (I mentioned that a well is $2,500 right?). On Saturday morning we were a long way from funding one well, much less three! 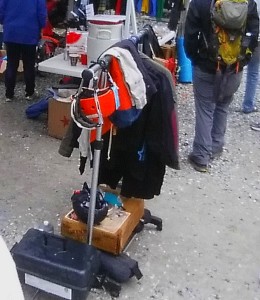 But then a funny thing happened. I would look at racks and shelves full of used gear and homemade treats and wonder; can a well possibly come from this? And that’s when I noticed it. Each time I would look at the shelves, they would be full of stuff. It wasn’t until recognizing that the gear on the shelves was completely different items that I got a glimpse of the miracle going on around me.

Do you remember the story about Jesus teaching and healing the sick in a large crowd for a day? Click here for the full story. By late afternoon the disciples were hungry and they wanted to send the people home. After Jesus challenged the disciples to feed the hungry people the best they could come up with was five loaves of bread and a couple of fish. What!?! The disciples must have thought it was just enough food to get the crowd riled up.

Then Jesus blessed and multiplied what was offered. And thousands of people were fed. I should have known better than to doubt that Jesus could multiply gear and offerings exponentially so that hundreds of people could have clean water to drink. On Sunday morning, at the riverside service, I was happy to report that we had raised enough for a well that weekend. But Jesus wasn’t finished. 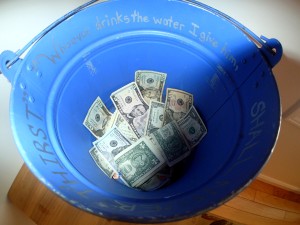 On Sunday, donations for wells continued. With grateful and determined hearts, everyone contributed more than could be expected. One couple anonymously contributed enough for an entire well! Online donations continue to come in. It all totaled up to being enough for THREE WELLS!

Early next week, I will be transferring money to Dr. Eugene in Haiti for the new wells. This brings the total number of wells to twenty over the past four years for our little ministry. Thanks to everyone that has been a part of this miracle. As Jesus would say, “Well done! … Let’s celebrate together!” 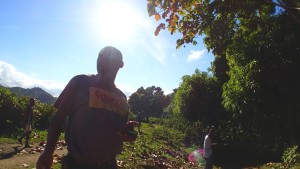 One of the key things we do on our trips to Haiti is look at potential wells sites. We enjoy meeting the people and hearing their stories. We hear stories of lives saved … and lives lost. The needs are so great but we are little by little making a difference and giving hope in Jesus’ name. It is our call to Christian action. It is how we meet Jesus and share with children of God a cup, or bucket, of cold, pure, life-giving water. And we are making a difference, thanks be to God. 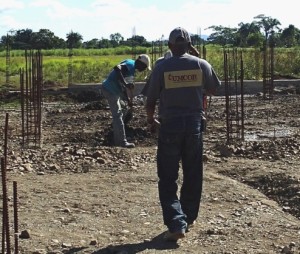 On Day 6 of our Haiti trip we were able to get back to see the construction of the hospital located between Plaine de Nord and Acul de Nord. The River of Life has been blessed to provide the wells and plumbing necessary for proper hospital activities. It is a real blessing for us to be a part of this vital mission of health, life and hope in northern Haiti. If you want to read more about the hospital go to Dr. Eugene’s website at:  haitimissionbranchenord.org/vision/ 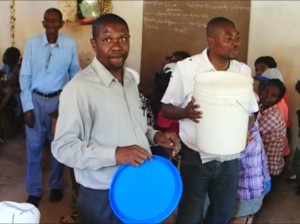 Today we delivered some supplies and water filtration buckets to a school named Communautaire Bienfaisance
de Maroquee in the town of Maroquee. Over 200 children attend the school on a daily basis. We came to find out over the course of the day that this was not the first experience this community had with purification systems and buckets. Over two years earlier the Bryson City United Methodist Church had sent 200 buckets with purification systems to the community. We would hear today how those buckets had saved many lives of people in our presence. It was a God sighting!

Click Here to watch the video from Day 5 bucket delivery.

Give to: River of Life

In the Give to: box, in the drop down menu, select River of Life: Wells in Haiti.